I posted my entry a few days ago, and mentioned that my process had become kinda shaken up, in a good way, by Blaugust, so I wanted to document it in a little detail.

The idea of the contest was to illustrate a story in three images. The story must be on the theme ‘misunderstood monsters’ (inspired by Frankenstein), and it must show: dilemma, conflict and resolution.

I started during Blaugust, with a general brainstorm of monster characters and plot points. What type of monster can I have? What kind of story do I want? I latched onto the idea of a monster protecting its babies (or eggs) from human action and being misunderstood as simply hating humans. From there I got excited about princesses and dragons and different ways that humans and dragons could come up against one another (mining etc). I researched different historical views on dragons and got sidetracked learning about King Tamar and medieval Georgia and just focussed on learning about that to spark ideas. Here are my sketches at this stage:

(You can see that a lot of the compositional ideas stayed with me even as the setting changed dramatically.) At this point I considered adding an advisor character, got a little frustrated by the ‘why’ of the story and – inspired by Shaun Tan – decided to write some accompanying words to clarify it all in my head. These words actually stayed through the whole process and you can see an alternate version of my entry on tumblr.

they are rhetorical, but you do not notice

it’s only later you realise

there may have been answers

Then I threw the whole thing up in the air and tried to work backwards from the text, creating a different story in a different world. I no longer wanted to be working in a medieval setting and I kinda wanted a modern or steam/cyberpunk story. I write a lot of notes in my sketchbook when I’m brainstorming, which is kinda cool because I can follow back my thought process later.

“dragon was useful because it’s a crest and also a monster. the juxtaposition is built in.”

and then on the next page:

“it’s her own invention! it IS Frankenstein (…) she created life that could create life.”

And that was basically the final key to the ideas in the narrative. A few more pages of sketches and miscellaneous ideas (what kind of monster, again) and I sketched something that set a visual tone for me and created my main character: 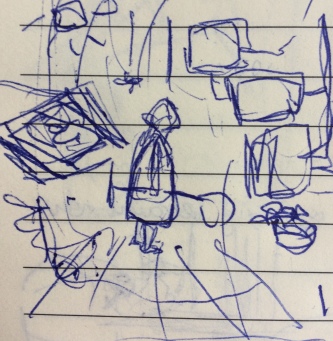 I designed the robot from pterosaurs (the true dragons) and bats and birds. And then I finalised the compositions using ideas I’d already generated earlier.

At this point I also had to actually render the pieces. And this was the most scary part, but also maybe the best news of the whole project, because it was more fun than rendering has been for me for a long time, much quicker and less stressful on my body, and I liked how free it felt when finished. It’s mostly made of watercolour elements that have been scanned in, resized/rotated and layered over (and sometimes inverted). On top of that I added the main characters in digital paint with digital pencils over the top.

I still have a lot of experimentation to do, and I don’t think I’m going to render every picture this way from here on out. But it was an enjoyable way to build a piece and I liked the sort of photo-negative vibe it gave off, leading me to feel like the whole thing was taking place in an industrial cold-war type setting.

Taking my time to let ideas percolate was really useful and led me down paths I wouldn’t have otherwise gone. Using words to help me attach emotions to the pictures was also interesting, and I think it really helped me distill the concept in my head. And I’m excited by the prospect of using traditional materials more in my work. So, good stuff all round 🙂